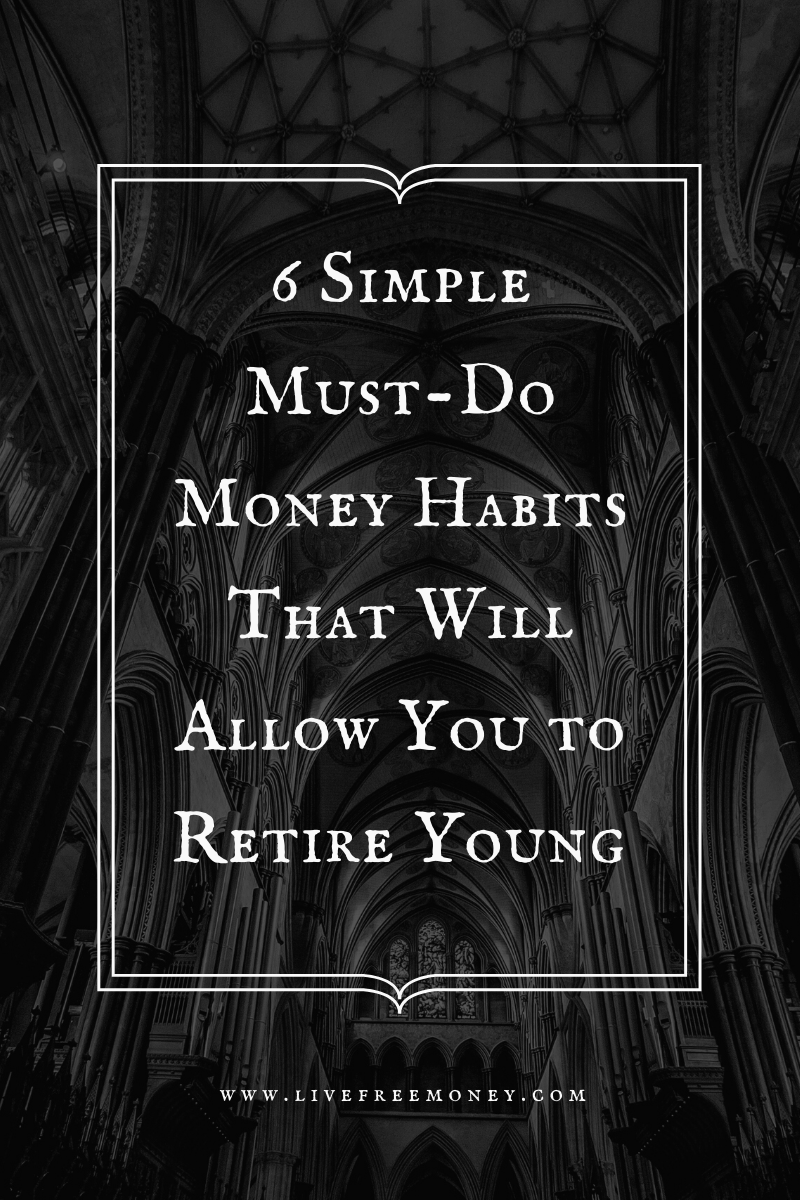 Are you looking to retire young? Most people eventually get their act together financially, more or less. But nothing will pay greater financial benefits than Father Time. For many people, by the time they learn these essential elements of wealth building, too much time has passed, and they’re left scrambling. Begin to build these simple habits now and avoid future financial hardship.

Why is it that so many people say they love having money, but then give it all away to someone else? Seems counter-intuitive doesn’t it?

It’s a complicated question, but the solution is relatively simple. Especially if you’re trying to retire early.

People are acquisitive. They love to shop. It’s built into our DNA as hunter-gatherers. Our very survival depends on acquiring resources. For some people, this manifests itself in that morning cup of premium coffee, while for others it’s a new fashion statement item of clothing.

This changes with a simple act of reframing. What if instead of that morning coffee or that new piece of clothing, the target becomes the cash itself? Rather than being a hoarder of closets, drawers, and garages full of useless stuff, we become hoarders of cash. That doesn’t mean we can’t ever buying anything. That comes a little later. Keep reading.

Once again, it’s a complex problem with a simple solution. While it’s always good to look for ways to increase personal income, it’s pointless if it isn’t managed well. Sadly, this is the case for most of the population.

Here’s how to fix that.

What happened to my money?

Poof! Payday arrives, the cash is in the bank. Poof again, and it’s gone. Ask most people and they will tell you this is the fault of the landlord, the grocers, and the government. They may not always make it easy, but it doesn’t matter. The focus needs to be on what can be controlled

First, find out whose pocket the money is really going into. A close look will often reveal that it’s the little things that get you. The morning coffee. That cheap t-shirt that was such a great deal. That kindle e-book (that you never read).

Before you start pushing for a raise, take a good look at where your piggy bank is leaking cash. Open a notebook (don’t go shopping for one) or spreadsheet. Start a daily list that tracks every single nickel that flows in or out of your control. This might seem like a bit of a task initially, but it will be a life-changing experience–that one difference that will put you ahead of the crowd. Also, this isn’t a forever thing. 90 days should do it.

What will this accomplish? It will reveal just how much money is wasted on unnecessary items that will lose their value almost instantly. It will create an awareness that will cause a shift from money waster to investor.

Now that enlightenment has been achieved, it’s time for the really fun stuff. But first, here’s a couple of quick terms to get to know.

Fixed vs Variable expenses. Some expenses are set in stone, but these are fewer than many of us think. For now, the focus is on the variable expenses. Look for anything that can be reduced or eliminated. Anything.

Opportunity Cost. This is simpler than it sounds. It just means all the things that could have been bought instead of what was bought. Is there something better that could have been acquired with that twenty bucks (like a share in a company that would have churned out more cash in the form of interest, dividends, and capital gains)?

Be ruthless. Starting slow is best for some people who need to adjust. For others, it’s an instant purge. One way or another, start plugging those cash leaks and redirecting that cash into investments. It’s a plan that leads to good times and being able to retire young.

Bring out your inner Warren Buffet

Everyone knows Warren Buffet. He’s the super-rich guy who owns everything from trains (not the toy kind) to furniture store chains, and Dairy Queen. Warren Buffet made his money investing, and while he’s brilliant, it isn’t necessary to achieve what he did to have a very high level of financial success. Warren Buffet learned some key fundamentals on investing early. Anyone can do the same.

In this day and age, we don’t have to be Warren Buffet to be investors. Building a relatively safe, conservative portfolio of stocks is within the ability of most people with internet access, cheap stock transactions, some basic knowledge, and a desire to retire young . These days we can buy small amounts of stock anytime right from the kitchen table, and soon those quarterly dividend payments will start rolling in.

Of course, stocks aren’t the only thing to invest in, but it’s arguably the best place to start. It can be easy, requires only small amounts of money to get started, it’s relatively low risk, and it’s simple. Think blue-chip dividend stocks.

So, what’s the point of having money if we can’t spend it? The trick here is to think of the money that money makes. It’s the magic of compounding, like the proverbial snowball rolling down a hill getting bigger and bigger. Those original few snowflakes grow into an avalanche that crushes everything in its path

Money invested over time does the same. To learn more check out our article on the 4% rule!

Like most things that are good for us, the secret sauce is ‘taking action.’ The sooner those first steps are taken, the sooner financial freedom comes. After all, who wouldn’t want to options of being able to retire young?

Luck is what happens when preparation meets opportunity.